Rent Cowgirl Costumes Singapore
Made with slightly stretchable materials, miiostore’s beautiful Cowgirl costumes are sure to impress at every occasion! A favourite for DNDs, corporate events, and parties. Also popular for halloween, wedding gatecrashes, and birthday parties!

Note: Does not include black inner tube top. 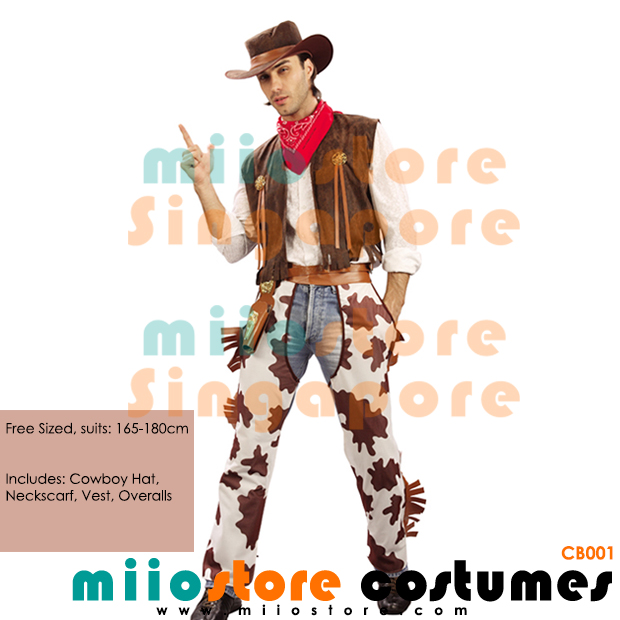 Note: Does not include white long sleeved inner shirt.

A cowboy is an animal herder who tends cattle on ranches in North America, traditionally on horseback, and often performs a multitude of other ranch-related tasks. The historic American cowboy of the late 19th century arose from the vaquero traditions of northern Mexico and became a figure of special significance and legend.[1] A subtype, called a wrangler, specifically tends the horses used to work cattle. In addition to ranch work, some cowboys work for or participate in rodeos. Cowgirls, first defined as such in the late 19th century, had a less-well documented historical role, but in the modern world have established the ability to work at virtually identical tasks and obtained considerable respect for their achievements.[2] There are also cattle handlers in many other parts of the world, particularly South America and Australia, who perform work similar to the cowboy in their respective nations.

The cowboy has deep historic roots tracing back to Spain and the earliest European settlers of the Americas. Over the centuries, differences in terrain, climate and the influence of cattle-handling traditions from multiple cultures created several distinct styles of equipment, clothing and animal handling. As the ever-practical cowboy adapted to the modern world, the cowboy’s equipment and techniques also adapted to some degree, though many classic traditions are still preserved today.

The origins of the cowboy tradition come from Spain, beginning with the hacienda system of medieval Spain. This style of cattle ranching spread throughout much of the Iberian peninsula and later, was imported to the Americas. Both regions possessed a dry climate with sparse grass, and thus large herds of cattle required vast amounts of land in order to obtain sufficient forage. The need to cover distances greater than a person on foot could manage gave rise to the development of the horseback-mounted vaquero.

Various aspects of the Spanish equestrian tradition can be traced back to Islamic rule in Spain, including Moorish elements such as the use of Oriental-type horses, the la jineta riding style characterized by a shorter stirrup, solid-treed saddle and use of spurs,[14] the heavy noseband or hackamore,[15] (Arabic šakīma, Spanish jaquima)[16] and other horse-related equipment and techniques.[14][15] Certain aspects of the Arabic tradition, such as the hackamore, can in turn be traced to roots in ancient Persia.[15]

During the 16th century, the Conquistadors and other Spanish settlers brought their cattle-raising traditions as well as both horses and domesticated cattle to the Americas, starting with their arrival in what today is Mexico and Florida.[17] The traditions of Spain were transformed by the geographic, environmental and cultural circumstances of New Spain, which later became Mexico and the Southwestern United States. In turn, the land and people of the Americas also saw dramatic changes due to Spanish influence.

The arrival of horses was particularly significant, as equines had been extinct in the Americas since the end of the prehistoric ice age. However, horses quickly multiplied in America and became crucial to the success of the Spanish and later settlers from other nations. The earliest horses were originally of Andalusian, Barb and Arabianancestry,[18] but a number of uniquely American horse breeds developed in North and South America through selective breeding and by natural selection of animals that escaped to the wild. The Mustang and other colonial horse breeds are now called “wild,” but in reality are feral horses—descendants of domesticated animals