Skip to content
Rated 5.00 out of 5 based on 1 customer rating
(1 customer review)

Requires Additional Refundable Deposit of $50 (To be paid upon collection).

Made with slightly stretchable materials, miiostore’s beautiful Male Prisoner Jailbird costumes are sure to impress at every occasion! A favourite for DNDs, emcees, corporate events, and parties. Also popular for halloween, wedding gatecrashes, and birthday parties! Available for rental in Singapore only!
‌
‌ 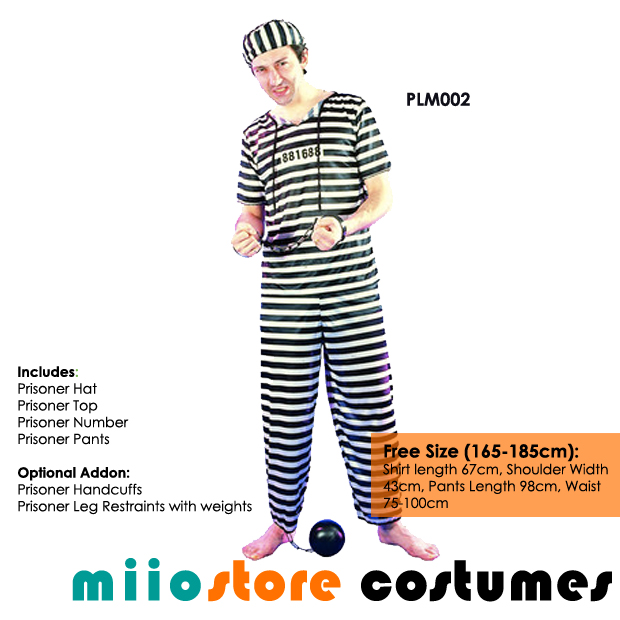 A prisoner, also known as an inmate or detainee, is a person who is deprived of liberty against his or her will. This can be by confinement, captivity, or by forcible restraint. The term applies particularly to those on trial or serving a prison sentence in a prison.

The convict code was theorized as a set of tacit behavioural norms which exercised a pervasive impact on the conduct of prisoners. Competency in following the routines demanded by the code partly determined the inmate’s identity as a convict.[19] As a set of values and behavioural guidelines, the convict code referred to the behaviour of inmates in antagonising staff members and to the mutual solidarity between inmates as well as the tendency to the non-disclosure to prison authorities of prisoner activities and to resistance to rehabilitation programmes. Thus, it was seen as providing an expression and form of communal resistance and allowed for the psychological survival of the individual under extremely repressive and regimented systems of carceral control.

Sykes outlined some of the most salient points of this code as it applied in the post-war period in the United States: